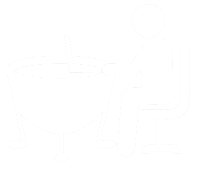 My HubSpot Tips and Tricks

How to use the HubSpot CRM with multiple currencies

So how will it work?

We'll create multiple sales pipelines (one per currency) to categorise all deals. Whenever a new deal is created, it will be assigned to a pipeline. We'll then use the HubSpot Reporting Add-on to build customised reports based on the different currencies.

It's important to understand that this is a workaround. There will be some limitations which I will point out along the way.

The Reporting Add-on is extremely helpful in this setup - I would say: essential. But we'll also take a quick look at what's possible with the 'out of the box' reporting that comes with the free CRM.

As this is a pretty long post, I thought it might be useful to provide a clickable index so it's easy to jump up and down:

1. Creating multiple sales pipelines - how and why?

For the sake of simplicity let's assume that we have one unified sales process. Thus, we would normally not setup more than one sales pipeline. However, in this case we'll use the same functionality to implement multiple currencies and to forecast correctly for each one of them.

Let me explain: The forecasting module on the standard CRM dashboard aggregates the weighted amounts from all deals. As the system only recognises one global currency, it adds up all the deal amounts (without currency conversions), so if we use one single pipeline for all deals across all the currencies the total forecasting amount will be incorrect. Here is an example for illustration purposes:

As soon as we create separate pipelines, we can forecast separately. On the standard Sales Dashboard we get the option to chose a specific pipeline in addition to chosing a timeframe and a specific sales rep:

This article from the HubSpot academy explains how we can create multiple pipelines. I would recommend to use very concise and short names such as EUR or USD.

First, I would consider whether you really need different pipelines. If you have multiple products/services with an identical or a very similar sales process, I would recommend to use different Deal Types instead of multiple pipelines. 'Deal Type' is a built-in deal property that you can fill with values to suit your needs (eg. 'Product A', 'Product B' or 'New Business', 'Existing Business' etc). This would free up the pipeline functionality for the multiple currencies.

If you really need different pipelines because your services or products have vastly different sales processes, I would recommend to have one pipeline per product/service & currency.

Keeping in mind that the HubSpot CRM is normally not used for particularly complex setups, this should be sufficient.

The approach described above will work in almost all cases. If this applies to you, then there is no need to read the rest of this (Skip to part 2). However there are a few exceptions when a different approach is needed: Most notably when the native HubSpot to Salesforce connector is used (more info) or when the no. of pipelines and the no. of currencies involved make this not feasible (see above).

If we cannot use multiple pipelines to represent the different currencies, we need to use a deal property: We could use the built-in 'Deal Type' (already mentioned above) but I would recommend to create a custom deal property instead as this will allow us to give it a more obvious name such as "Currency".

To find out more about how to create a deal property check out this article from the HubSpot Academy. I would recommend to use 'Dropdown Select' as the type of the property. 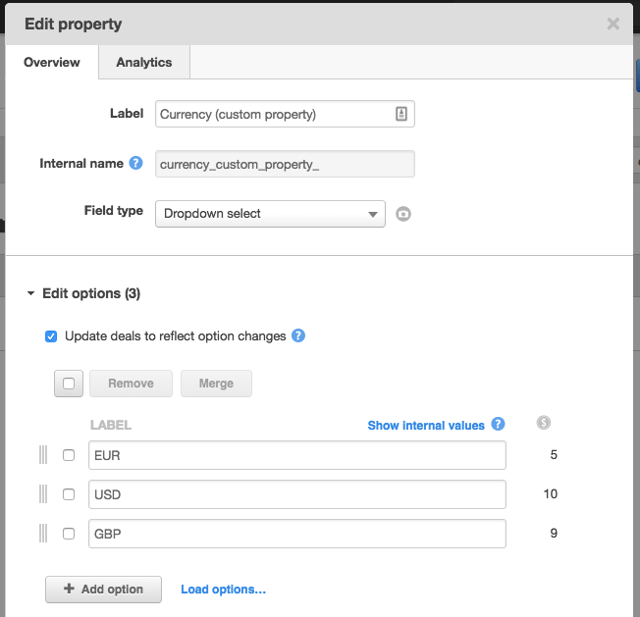 2. How a sales rep will use this

The creation of custom reports (aka the way the sales manager will use this) will be almost identical whichever approach we take, however there are some major differences in relation to how a rep would use this: 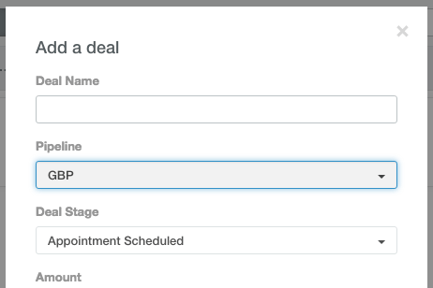 Using the personal dashboard in the free CRM:

In order to be able to report on our different currencies, we need to create two types of deal views per currency:

Both types of views can be created very easily: Start with a standard view ("My deals" or "All deals"), select a specific pipeline (or a value from the currency property) and save the view. Here is an example: 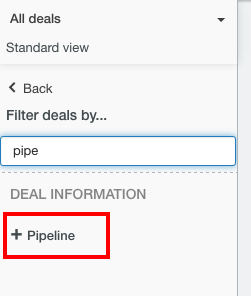 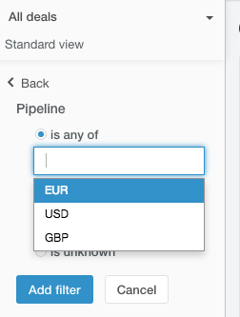 If you're using a custom deal property instead, it would look like this: 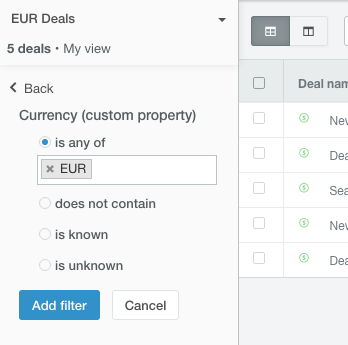 Repeat the same approach until you have separate deal views per currency. Make sure you use very clear naming conventions to avoid any confusion. It should now look similar to this: 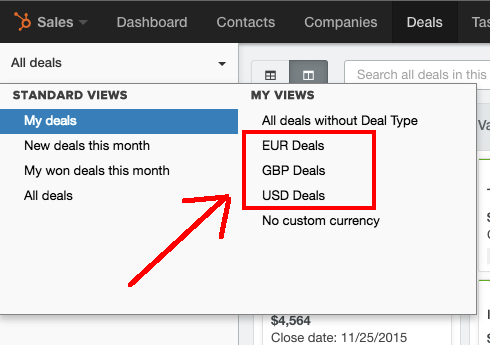 If a deal property is used I would recommend to also create an additonal view for all deals without a custom currency value (see the 'No custom currency' deal view in the screenshot above). This will allow you as a sales rep to spot any deals where you forgot to select a currency. You should check this view regularly to make sure it stays empty. The same also goes for the manager who might want to create a global view with the same criteria.

3. Basic reporting with the free CRM

Now that we have the pipelines/property and the deal view in place, we can move on to the fun part: the creation of customised reports and dashboards. Anytime we want to report on deal properties and/or want to create custom deal reports, the Reporting Add-on is required. Our scenario with multiple currencies is no exception here. Nevertheless, before we dive into examples of custom built reports, we'll take a quick look at what's possible with the built-in reporting with the free CRM.

We already discussed the forecasting functionality on the main dashboard, so let's take a look at what info we get from deal views: Views are very helpful to show all deals according to specific filter criteria but as the name suggests they're essentially a way to display information not to report on them. 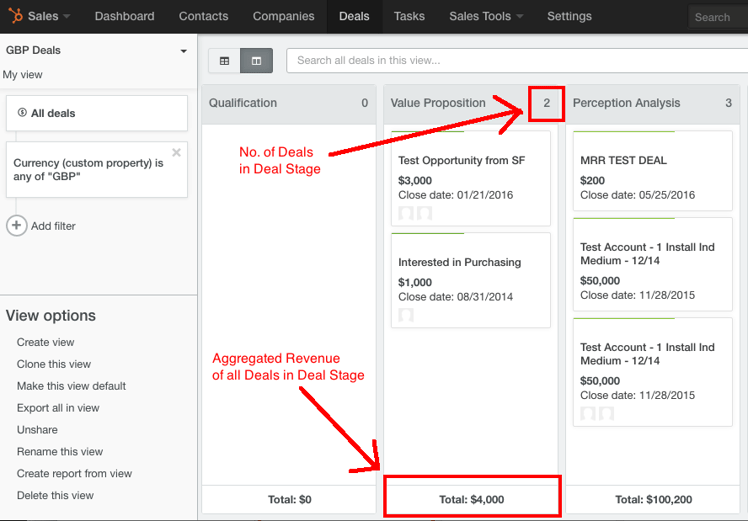 However, we cannot compare the currencies with each other without switching between different deal views. We also don't get aggregated amounts of revenue for all deals in a specific currency.

4. How a sales manager will use this - Creating custom reports with the Reporting Add-on

The Reporting Add-on is very powerful and enables you to create lots of different reports, so the following reports are by no means all the reports that can be created. It's simply a selection of reports that I feel would be particularly useful for such a scenario.

Please note: most of the following screenshots are based on the alternative approach (using a deal property) instead of multiple pipelines. This is because my own instance of HubSpot which was used here is also connected to a Salesforce developer account for testing purposes (multiple pipelines cannot be enabled if HubSpot is connected to SFDC).

As explained before: the better approach with multiple pipelines works exactly the same way. Instead of selecting the custom currency property, simply select the pipeline option.

Let's first start with some global reports which show information about all currencies. I would recommend to create a 'global' dashboard for these reports. 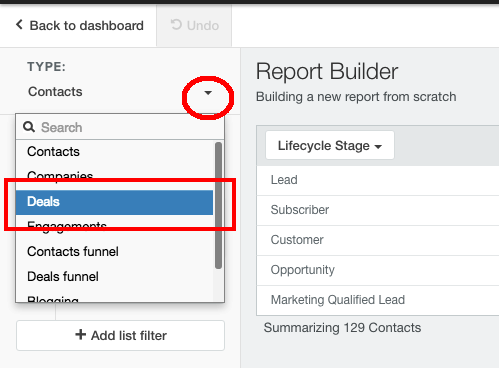 4.1.3 Current distribution of all deals across the different Deal Stages - broken down by Currency

This report is particularly exciting as we're going to create a matrix. 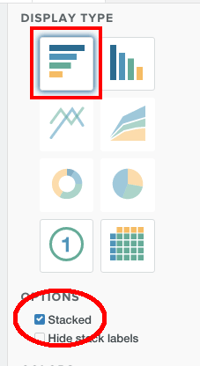 Depending on your setup, it would probably make sense to create a separate dashboard per currency. Alternatively, you could group the same types of reports together on one shared dashboard (across all currencies). Please note that you can have max. 10 reports on a dashboard.

As with the global reports: the possibilities are almost endless. However, for the purpose of this tutorial we will stick to two 'out of the box' reports and customise them for a specific currency.

4.2.1 Closed Deals vs Goal for a specific currency

Use the very same approach to create the same report for the other currencies. Please note that you can save time by cloning the existing report. Simply click on the gear icon of the report that you would like to clone (directly on the dashboard) and select 'Clone'. This approach requires the original report and the clone to be one the same dashboard. 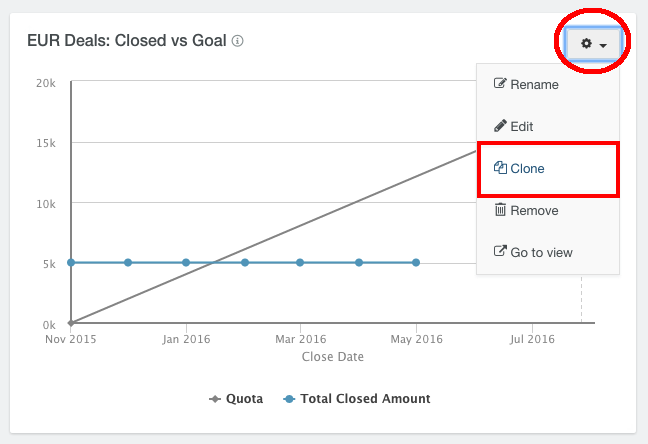 As mentioned previously: if you cannot use different pipelines for each currency, the forecasting on the standard CRM dashboard will be incorrect. Again, we can use the Reporting Add-on to help us out and to build correct forecasting reports at the global and the individual level. 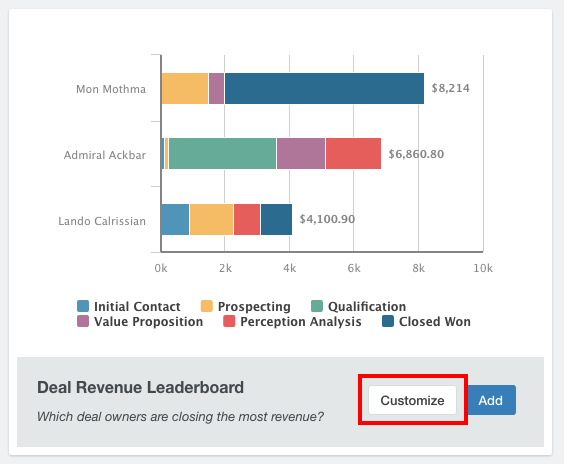 Three disadvantages of this approach come to mind:

Please also note that you can create max. 20 dashboards with 10 reports each, so if you have 20 sales reps you would need to reserve at least 2 dashboards for this purpose.

There are a few different report widgets that can be used here. The end result is pretty much the same:

The numbers shown in the reports are identical but the visual representations are different:

Regardless of the approach used, you would create separate reports for all your currencies. Again, consider cloning reports to save time. 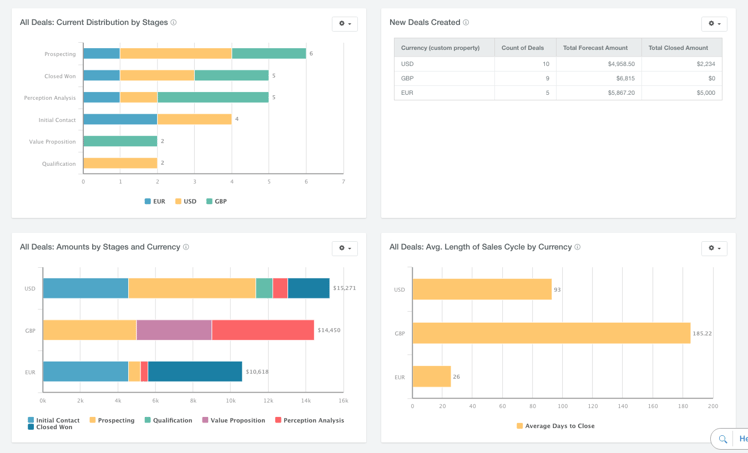 As a Sales Engineer with HubSpot I always enjoy finding solutions for specific use cases. The purpose of this blog is to describe some of the tips and tricks that I've come across or developed myself and to share them with the HubSpot audience.